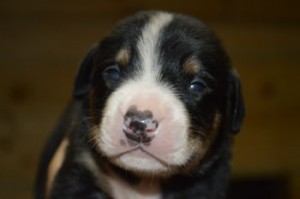 Temperament
This is a wonderful breed with all the intelligence, personality, agility and loyalty you could ask for rolled into a sturdy little package. It is important to make sure that this little herder is compatible with your personality and lifestyle, as this is a dog that will be happiest if it is by your side every waking hour. The Entlebucher, while being independent and self confident, is nonetheless very attached to its people, and must be made a part of the family. One of the greatest qualities of this breed is its unwavering devotion to its master. This is not a breed that will do well if left in the back yard, unless, of course, that is where the family is as well. The breed is territorial and slightly suspicious of strangers, making it a competent watch dog. They have an impressive bark and naturally announce the arrival of newcomers. While they are naturally confident and social dogs, socialization and training is required. Entlebuchers are generally regarded as great dogs with children, although there may be exceptions. The additional time required to train a smart, willful dog is a major consideration for a busy parent. Due to the Entlebucher’s keen sense of social hierarchy, the head of the household will need to be actively involved in the training. This is an active, physical breed and loves to play and rough house. Once trained to be gentle with children, however, an Entlebucher is an excellent play mate, and may even round up your kids like a small herd of cattle.

Exercise
It is important to keep in mind that this relatively small dog is indeed an excellent cattle herding dog. They are quick, tough, and very physical, known for hurling themselves at livestock. Entlebuchers need a sufficient amount of exercise, an hour a day of vigorous activity is a minimum. Due to the breed’s intelligence, stimulating activities are necessary to keep a happy, manageable dog. Entlebuchers love having a job to do, and are well suited to agility and obedience also.

HEAD
The skull is flat on top with a well-defined but not exaggerated stop. The muzzle is straight and strong. The lips are clean, eyes dark brown and lively. Nose always black. Full dentition. Ears are medium size, set high, triangular in shape, gently rounded at the tip. When alert, ears are brought forward and raised at the base. The teeth meet in a scissor bite. Occipital bone barely visible. Frontal furrow slightly pronounced.

FOREQUARTERS
The shoulders are moderately laid back, flat lying, well-muscled and never loose. Legs are straight and strong, placed well under the body. Upper arm length equal or slightly shorter than shoulder blade. Angle to shoulder blade about 110-120 degrees. Elbows lying well onto the body. Pastern see from front in straight continuation of the forearm; seen from side slightly angulated and relatively short. Feet are round and compact with arched toes, pointing straight forward. Pads coarse and robust. Dewclaws may be removed on the front legs.

COLOR & MARKINGS
Typically tricolor. Basic color black with tan (faun to rust red) and white markings which should be as symmetric as possible. The tan markings are placed above the eyes, on cheeks, muzzle and through, either side of the chest, and on four legs. On legs, the tan is situated between the black and the white. White markings include a distinct small blaze which runs without interruption from top of head over bridge of nose, and can wholly or partialy cover the muzzle. White from chin over throat without interruption to chest. White on all four feet. Undesirable but tolerated — small white patch on the nape of the neck (not more than half a hand’s breadth).

FAULTS
Any departure from the foregoing points must be considered as a fault, and the seriousness with which the fault should be regarded should be in exact proportion to its degree. Under or over size; rounded skull; short, too long or pointed muzzle; roman nose; eyes too light, too deep set or protruding; ectropion, entropion; ears set on low, too small or too pointed; ears carried in a flyaway position or folded; bite over or undershot; absence of teeth other than 2 PM 1 (Premolar 1, absence of M3 not considered); back too short, hollow or roach back; rising or strong sloping croup; chest too shallow or barrel shaped; kinky tail or tail carried over back; limbs too fine-boned, insufficiently or too strongly angulated, incorrect position, cow hocked or bow-legged, too close together; weak or broken down pasterns; feet longish or splayed; weakness in temperament; aggressiveness.
Faults in markings: interrupted blaze; too big white patch on the nape of the neck; white collar around whole neck; broken white on chest; white reaching distinctly above pasterns.

General Appearance
This is a smaller than average dog, well proportioned in every way. Very mobile and nimble with a friendly and intelligent look. A good guardian and herder of cattle; a faithful and incorruptible guard dog and
companion.

Head
Well-proportioned to the rest of the body. Flattened forehead with a slight stop. The jaw is powerful and well shaped. The muzzle clearly detaches itself from the forehead and from the cheeks. Cheeks are not very well developed. The eyes are rather small, brown, alert. The nose is black. The ears are of medium size and set high. The ear is rounded at the bottom, pendulous and set close to the head. As with all Swiss mountain dogs, the ear is turned slightly towards the front when the dog is alert.

Neck
Short and compact, connected to the body without transition.

Body
Fairly stretched out, giving the dog the general appearance of being longer than he is tall. The chest is deep and broad. The back is straight and strong.

Legs
The shoulder is long and oblique. The legs are straight and sturdy; hocks at right angles. Feet round and tight. Dewclaws are undesirable.

Tail
The tail is blunt from birth.

Coat
The coat is similar to that of all Swiss mountain dogs: black with markings varying from yellow to rusty-brown over the eyes, on cheeks and on all four feet. Symmetrical white markings on the head (blaze), on the neck, on the chest and on the feet are also viewed positively; yellow or brown colouring must then be situated between the black and the white areas.

Particular faults
A rounded superior part of the head, light coloured eyes; an elongated, fine or curved muzzle; a muzzle that is overshot or undershot. Pointed, short, detached or poorly set ears. Splayed toes. Inappropriate colours or too much white colour. Hair too long or too soft.