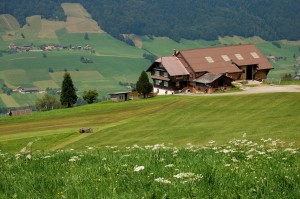 Originating from Entlebuch, a valley in the district of the Cantons Lucerne and Berne, the first description under the name; Entlebucherhund; dates from the year 1889. For a considerable time after that date, no difference was made between Appenzell and Entlebuch Cattle Dogs. In the year 1913, four examples of this small herding dog with congenital bobtail were exhibited at a dog show in Langentahal and introduced by Professor Albert Heim, the great patron of the Swiss Mountain and Cattle dog breeds. On account of the judges’ reports, they were entered into the Swiss Canine Stud Book (SHSB as the fourth Mountain and Cattle dog breed). However, the first Standard was only completed in 1927. After August 28th, 1926, the date of the foundation of the Swiss Club of Entlebuch Cattle Dogs initiated by Dr. B. Kobler, this breed was promoted and continued as pure bred. As the small number of entries into the Swiss Stud Book shows, the breed developed only slowly. The Entlebuch Cattle Dog received renewed impetus when, apart from his hereditary qualities as a lively, tireless, driving dog, his outstanding suitability as a utility, as well as a companion dog was proven. Today, still on a modest scale, this attractive tricolored dog has found admirer's and enjoys increased popularity as a family dog.

Due to crossings with the German Shepherd and other newly imported purebreds, the Sennenhund were nearly lost by the early 1900s. The dedicated efforts of Professor Albert Heim and others, as well as careful monitoring by present day breed clubs in Switzerland and Germany, have managed to preserve the Entlebucher breed. The numbers are still relatively few and they are often mistaken for a mixed breed dog.

The Entlebucher is a compassionate, loyal and intelligent dog, and ownership is not to be taken lightly. They require daily exercise, work and attention and in turn they will reward you with complete devotion.